I guess we could call this a fairy tale.  It features a damsel in distress, a swarthy pirate, more than a few ne’er-do-wells, and of course, true(ish) love.  The works, really.

As with any fairy tale, we start with a heroine.

Meet Navajo.  A descendant of the nobility, she’s a little brassy & maybe a little rough around the edges, but really, who can be expected to have their life totally together at the tender age of six years old?  Growing up is complicated.

It came to pass that on a warm Wednesday afternoon that Navajo found herself ensnared by Garay.  Gun metal gray and missing a good chunk of his left ear, this only thing this handsome devil is missing to complete the look is a eye patch and a Goffin’s cockatoo chilling on his withers.

How did Garay manage this feat?  How much effort did he put into stealing Navajo away?  Heck if I know.  I was napping.  It’s poor form for a narrator, I know, but a girl can only run on 3 hours of sleep for so long before an inevitable crash.  I suspect that true to pirate form, this was a crime of opportunity.  See mare, tote mare away.  Easy peasy, lemon squeezy.

What I do know for certain is that by the time I woke up m’lady Navajo was running up, down, and all around the mountaintop.  She was getting into tiffs with Jacinta, the rotund bay leader of Garay’s crew.  She. Would. Not. Shut. Up.  This went on for hours, my friends.

This unladylike behavior gained the attention of some brigands.  Shocker, I realize.  Few were as eager as Gringo, or as I like to think of him, the Russell Crowe of the wild horse world.  Except I don’t think Russell Crowe has ever been in a movie where he was gung-ho for his baby sister?

Inconvenient family relations aside, Gringo was about to make Garay’s life a lot harder.  The literal storm clouds were brewing, the metaphorical tides were roiling, & Gringo’s attitude signaled that there was blood in the water.

Naolin joined the fray.  And then more bachelors.  The entire crew was surrounded.  What’s a wayward swashbuckler to do?

If you’re Garay, you fight them all, of course.  Dukes up!  Then, puffed up on success, try to woo the kidnapped lady.  Then pull a shocked Pikachu face when said kidnapee refuses to be charmed.

While Navajo was able to spurn the grullo ruffian’s advances, she was still trapped.  What’s a girl to do?

As Garay snaked the pirate crew & Navajo far far away (okay, fine, it was all of 60 yards), another band crested the hill.  London.

Oh.  Baby.  Cue up that drum & trumpet crescendo bit of Holding Out for a Hero because it’s about to go down.

This is also the part where I must briefly break the third wall and apologize for the photo quality.  A combo of weird light and a couple really bad decisions on my part led to this entire evening’s images being, well, a little crunchy.  Yes, even worse than what you’ve seen so far.  Choices were made this trip.

London, you see, if Navajo’s man.  Or her flavor of the moment, at least.  And who can blame her?  Those luscious locks, his gentleness with the babies, that God-given gift of masterful side eye.  That’s a whole lot of stallion, if ya know what I mean.

London began his heroic rescue by galloping around in circles just below the fence line that Garay’s crew was butting up against.  To build suspense?  I guess?  If so, props for being self-aware of how to build up the tension, sir.

Now Navajo was paying attention.  The cavalry had arrived & her rescue was nigh.

Fairy tale officially cancelled.  Skip to the next track.

That’s right.  The knight in shining armor got his butt whooped.  Well now what’s a mare to do?

In this case, Navajo used the brief distraction to be a self-rescuing princess.  Garay could chase London or he could chase Navajo, but he would not possibly do both.  So he chose to go after Petit.  Then Naolin & Gringo.  Way to cut your losses, am I right?

By the time London stopped gimping (which required about 20 feet of trotting), he realized that he had left his entire band alone with those ruffian bachelors not 10 yards away.  He headed back and sure enough, Navajo was safely ensconced in the middle of her friends. 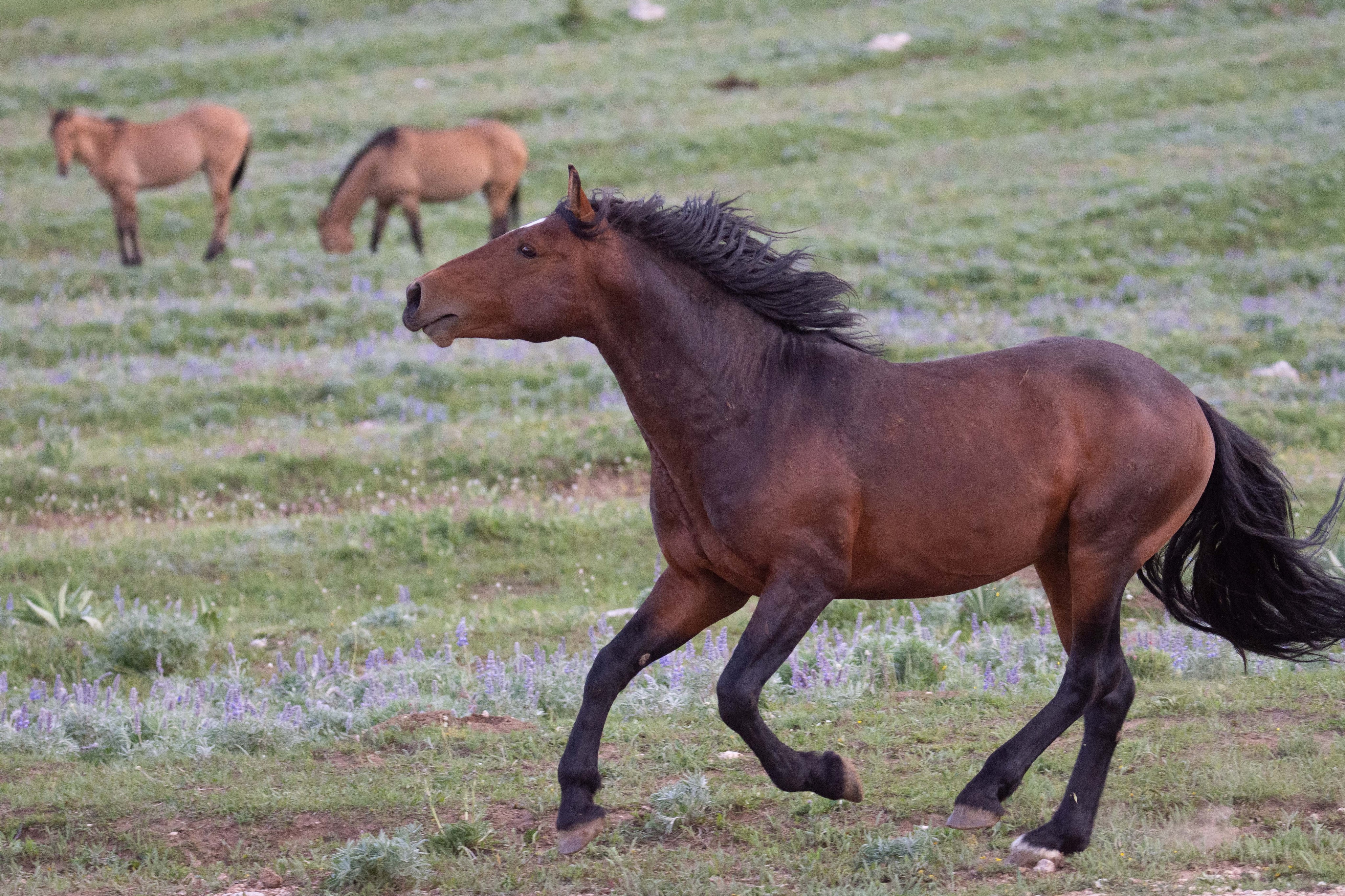 Peace and justice was officially restored.  The next morning everyone was still back where they belonged.

Except maybe Gringo.  Gringo is still in the shadows.  Waiting.

So who calls the shots in a wild horse band?  The internet is filled with a metric manure ton of images like those above – stallions fighting.  Powerful.  Glorious.  We all need a little eye candy to brighten our day from time to time, and stallions easily fit that bill.  But with those photos come a narrative.  A narrative that says that stallions are the sole protectors of their families, bravely controlling every aspect of life while the mares simper on the sidelines, going where he commands.  Is that really true?

Or are the mares pulling all the strings?  Majestic and wise, do they take fate in-hand, merely allowing the stallion to come along for the ride?  Is that the reality, or am I just desperately searching for some feminist through line?

Navajo was legitimately stuck for a while.  She wasn’t too keen on staying with Garay (and Jacinta sure as heck wasn’t either), but it took hours for her to make a break for it.  Hours where Garay was the one calling the shots.

But Navajo was also able to successfully keep Garay from breeding her.  And she had no qualms about making a break for it – heading back to her preferred band without any stallions directing or leading her.  She had to brush by six other stallions to get to her, at the time, stallion-less crew.  They let her go.  Once she was there, Garay didn’t push the issue either.

As usual, it’s somewhere in the middle ground.  A mutual give and take.  The stallions do seem to have a measure of control.  The fighting is real, and their actions are not just a tactic to look pretty & woo like so many of their ungulate neighbors.  Wild horses learn how to respond to snaking behavior from a young age and even the surliest of mares obeys for fear of receiving a solid bite on the rump.  You just don’t see many mares that strike out on their own, especially in those herds that are more spread out.  In White Mountain I only ever see that happen with youngsters who are in heat & preparing to leave their natal band.

Sometimes mares can spend years in a band looking generally disgruntled and dissatisfied with their situation.  Maybe that’s just their personality in general (lookin’ at you, Topper).  But oftentimes it’s because they haven’t found a better offer that’s equally interested in them.  So you can’t just dismiss the stallion’s control.

On the other hand, mares will absolutely put her foot down, sometimes kicking the every living crap out of a stallion until he gives up and lets her go on her way (still looking at you, Topper).  Even attitude free, there seems to be some level of mutual respect, where many stallions will decide to make like Elsa and let it go within the blink of an eye.  What triggers that decision is something I don’t think any of us will ever truly understand.  Maybe Garay was exhausted and decided to heck with the nonsense, Navajo’s not worth it.  Maybe he did just have the horsey equivalent of a, “hey, you do you, girl” kind of thought.  Maybe he was simply terrified of Jacinta’s wrath.

So while it’s far from clear, I do know one thing: the gentlemen may be strong, but what the lady wants, the lady always gets… eventually.

Hey, you made it all the way through this post!  Congrats!  And thanks!  To all my White Mountain lovers:  I haven’t forgotten you.  I just wanted a nice, easy story to dip my toes back in the water, because if this is a fairytale, then all my stories for White Mountain are epic high fantasies aka long and waaaaayyyy more work than I am prepared for.

5 thoughts on “Strong. Fast. Fresh from the Fight.”