Family is  complicated.  It’s one of the basic tenants of this life.  The earth is most likely not flat, taxes are always too high, and your family is really weird.

Family has a very different meaning and structure to it in wild horse society than it does for humans, but they aren’t immune to this phenomenon either.  Take Flax’s band.

Flax has what is called a nuclear band which consists of a single mare, Aurora, and their offspring.  Or at least, that’s what it looks like most of the time.

Flax won Aurora a few years ago.  It was something of a rocky beginning, though they have fallen into a pleasant kind of equilibrium as only proper old-marrieds can.  Which is to say that Aurora does what she wants and Flax dutifully follows her lead or faces the consequences.

Aurora didn’t like me at first.  Actually, that’s putting it rather mildly.  She’d see me and would march her kids away before I even managed to open my car door.  She’s come around.  I never would have guessed just how far she would take that comfort, though.

It was May 7th, and the last morning before I had to go home.  I was feeling a little twitchy, though I couldn’t for the life of me explain why.  Colonel’s band had settled down for a nap – high octane stuff, to quote my friend Lauryn.  A bit below them, Flax’s band had done the same. 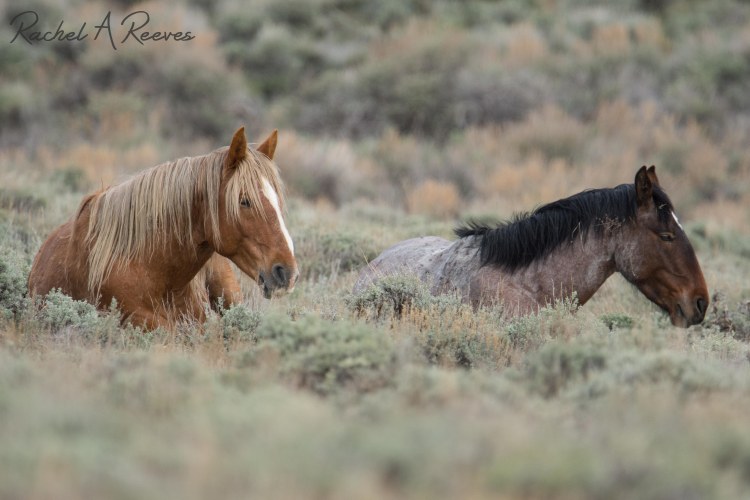 I figured what the heck and figured I would get a quick shot of Flax laying down before I took off.  Only the second I got within view of the rest of the band, I noticed that Aurora had something weird looking hanging off her derriere.  And huh, there were these teeny tiny little ears popping out of the sage.  Those weren’t there last night. 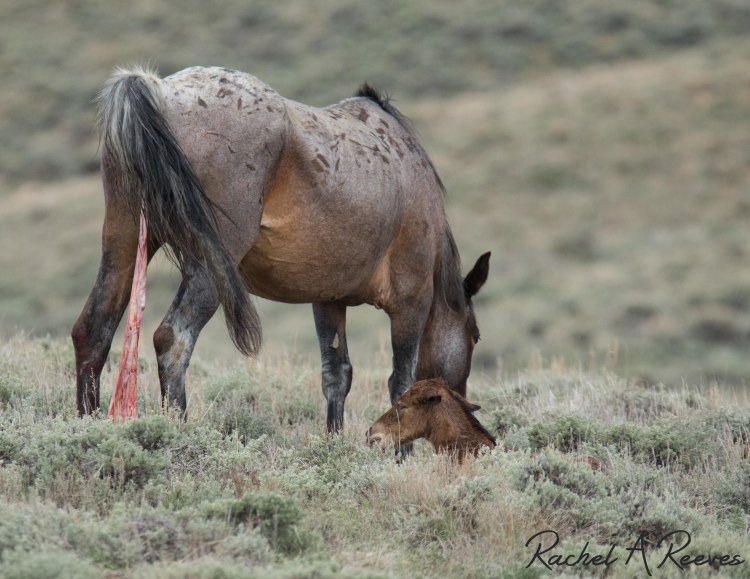 Sure enough, Aurora had given birth to a stunning bay filly, busy drying off while her siblings napped all around.

There is something unique about the look on a mares face after she has foaled. It’s hard to explain exactly what it is.  They are just so… proud.  Proud of themselves, proud of their new little one.  It’s just this piercing, loving gaze that I don’t see on them any other time.

As Aurora settled down for a brief nap with her little one, I quietly tip-toed over to a thick patch of sage and sat down myself. The night before I had to back up and away from Aurora repeatedly – she had no problems getting closer than I was comfortable with.  Even knowing that, I gave her a wide berth and stayed as far back as I had back in 2011-2013 when Aurora had despised me.  The ensuing ticks were totally worth getting to watch everything unfold without disturbing mama. 600mm lenses the crop tool exist for a reason, dagnabit!

Aurora wasn’t down long.  While she never directly encouraged the filly to stand herself, it was implicitly implied.  Almost like Aurora was trying to show the kiddo how it was done.

The filly actually got to her feet surprisingly quickly.  Of course, staying on them was another matter entirely…

Once the little one was up it took much longer for it to figure out the whole concept of nursing.  Now an intrepid reader may have a vision of what that looks like in their mind.  Newborn foal wobbles over to mom, takes its first drink while the mare sniffs at her baby’s tail with wonder and joy.  Yeah, it wasn’t like that.

See while the filly had the go to the back of mom and get under her belly part of the equation right, she didn’t seem too sure what to do from there.  Her yearling sister, Ariel, did.  And girl was thirsty.  Not to mention big brother Shang also really wanted to meet the little duffer.

Aurora is now stuck with a newborn foal who can barely totter right, a yearling daughter trying to shove said foal away from its dinner, and a rambunctious two-year-old who’s just here to have a good time.  Papa Flax is zero help.  In fact the deadbeat is still napping right where he’d been an hour ago.

Aurora, being the horse that wears the pants in the family anyway, took the matter into her own hands.  After the peaceful warnings didn’t work, she started circling endlessly, trying to cut Ariel off.  Ariel just wouldn’t take the hint.  Aurora seemed reluctant to outright kick Ariel, but was getting really sick of it.

It was about then that Flax decided to wake up.

Now by this point I am seriously reconsidering the conventional wisdom that mares foal alone to avoid predators.  Mountain lions have nothing on these tenacious goof balls.

Now the more Aurora worked at keeping the rest of the band away, the more she wasn’t there to help prop up the newborn.  Which led to the intrepid filly to occasionally tipping over at random. 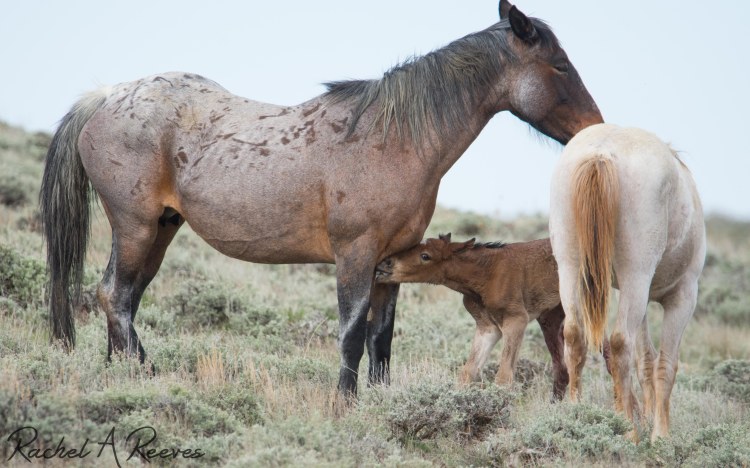 As I left, the family band had seemed to reach an equilibrium.  Surely everything could settle down and Aurora could focus on raising her little daughter up right. 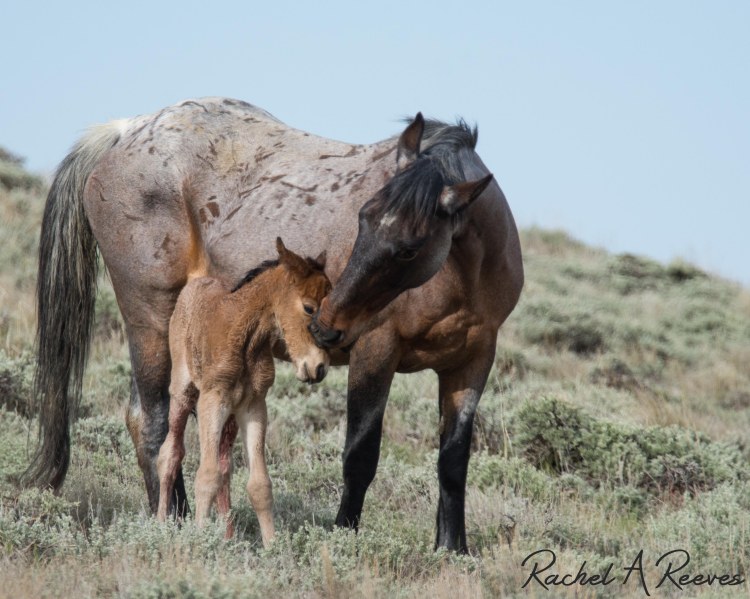 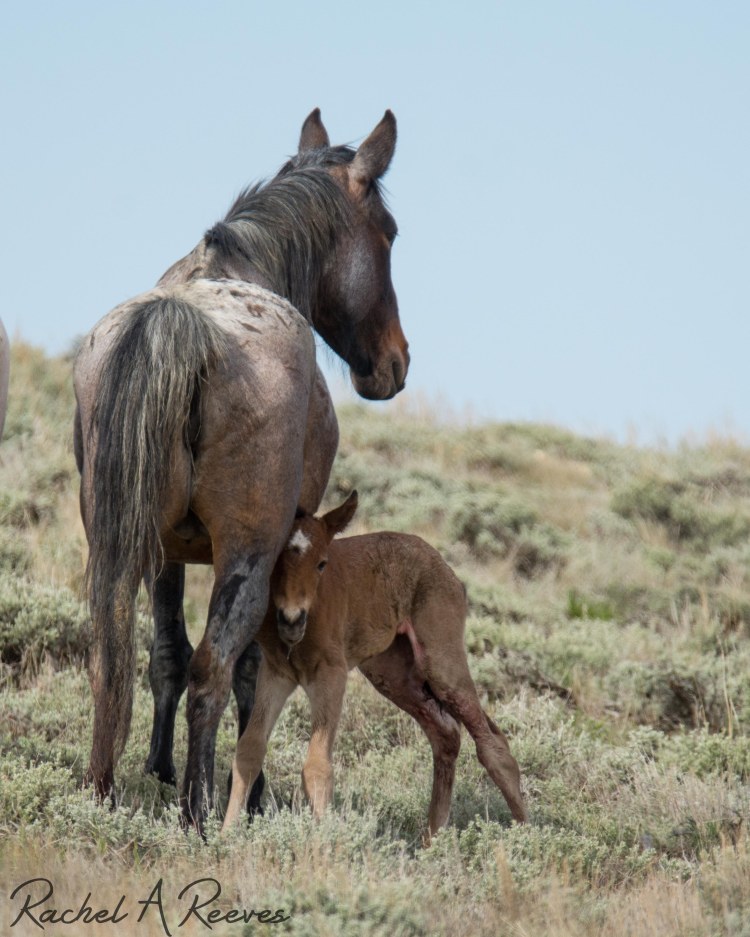 I returned to the range three weeks later to see that Aurora’s stress hadn’t diminished.  It had increased.  The filly was hale and healthy, and had finally figured out how to use her legs.

But Flax was limping.  The band was now being dogged by Blitz, the sire of Aurora’s 2012 colt.  Blitz had recently lost his only mare and apparently decided it was best to try his luck with a familiar face.

This meant the band was constantly on the move, weaving this way and that as Flax dealt with the discomfort of keeping Blitz away.

But there was more than just Blitz.  Shang was no longer with the band.  In Shang’s place Aurora suddenly found herself with a new… admirer.

Rocket is the two-year-old son of Stargazer & Vimes.  Vimes has the largest band in the South and all of his youngsters make for a rowdy bunch.  Yet while all of his brothers and sisters stayed together, Rocket decided to strike out on his own.

At first, Rocket was almost exclusively playing with Flynn or trying to befriend Ariel.  But the more that Ariel spurned him and Flynn ignored him, the more that Rocket began to gravitate towards Aurora.  In fact, he refused to leave her side! 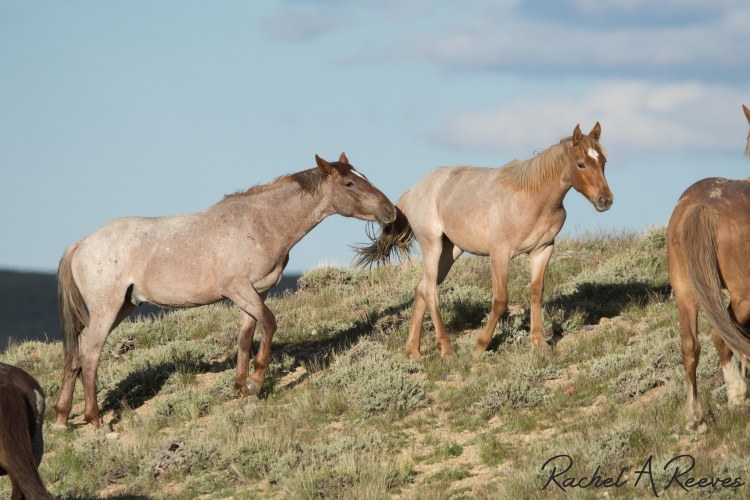 Aurora was thrilled by the attentions of this little man.

Still Rocket would not relent.  The more Aurora chased him away, the more determined he became to come back for more.  It reached the point that other band’s stallions were getting sick of it and chasing him away.

At points, Rocket would be within mere yards of his own family band.  He would look longingly at his mother and siblings, almost as though he was reconsidering his decision.  Then he would turn around and go back to Aurora.

It might have been young love burning bright in the chest of a foolhardy adolescent.  If it was, it was a puppy love.  Rocket did not act like a stallion trying to win a mare.  He acted like a little kid who thought it would be fun to join a different band.

Whatever his thought process is, it’s all apart of growing up.  Most young colts don’t leave their band because thy’re trying to join another band, but they all have to leave someday.  Grow up and eventually start trying for mares of their own.  Each stallion has their own path to success, their own way of trying and their own failings throughout the process.

Rocket’s current attempts won’t end well.  Eventually Flax will heal up and Rocket will find himself unceremoniously dumped into the bachelor life.  Blitz, on the other hand, is unlikely to give up anytime soon.  Flynn will likely be kicked out in the coming months, leaving Aurora with her two daughters.  One of those daughters is sure to find a new band of her own by this time next year.

Aurora will be stuck with the same nonsense until the end of time.

If the little filly survives, she will eventually leave too. When she does she will be in a new family that will be just as weird, dramatic, and complicated as the one she was born into.  There’s no easy relationships.  No easy life.  Just the one that’s your own. 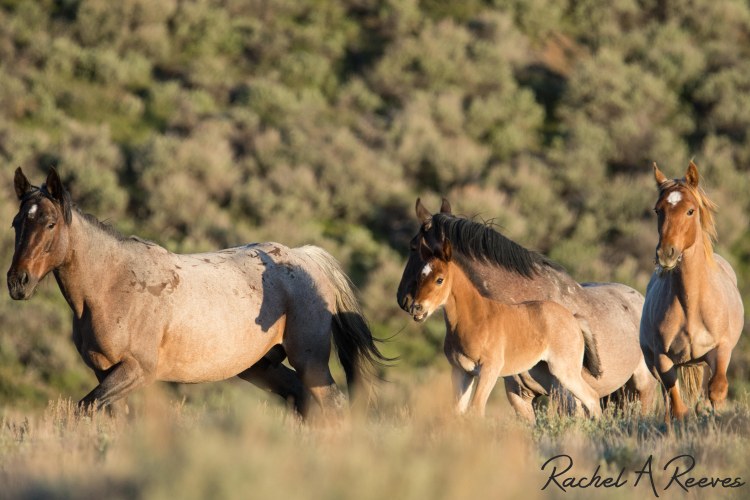 6 thoughts on “Cat’s in the Cradle”