Thanksgiving has always been my favorite holiday.  Well, my favorite non-religious holiday, anyway.  You just can’t beat a day that is filled with family and football.  I love being lectured by my Gramma about all the ways I’m cooking the turkey wrong.  I love watching the Macy parade with Grampa’s not so subtle innuendo when the Rockettes are on (he got to see them live once while stationed on the east coast during WWII).  I love watching football with my dad, getting pumped up for the Husker game that always comes the Friday after.  Heck, I even love cleaning the dishes and getting every single bit of turkey cut and stored for future meals.  Challenge accepted!

Of course, that’s under normal circumstances.  Because the lie in the above paragraph is that I kept it in the present tense.  Gramma died two weeks ago.  Grampa has been dead for nearly three years.  I’m stuck in Colorado instead of going to Nebraska.  Everything is all mixed up and upside down and I would give anything, anything to be arguing about a dead bird right now.

That’s the way of the world.  Everything is always in motion.  You just cannot control the ebb & flow of life any more than you can control the ocean’s tides.

And I don’t write this because I want to be a downer.  While misery may love company depressing everybody on a holiday is not my goal.  I want to talk about it, though, because I know that I am not alone in this.  I am not the only person to face what is supposed to be a merry day feeling empty, having to force themselves to go through the motions like somehow that will make everything better.  People say that time heals all wounds, but honestly?  I’m calling BS on that notion.

So let’s talk about change.

My Gramma was not the only tough as nails battle axe to leave this world behind in 2016.  We also lost a mare by the name of Winnemucca.  Winnemucca was the oldest mare in the Pryor’s recorded history and in the past two years, she was showing her age.  Her knees were arthritic.  Her body condition slowly worsened until she was little more than a walking skeleton.  In a lot of ways, it was probably a blessing when she passed when she did – before the winter hit and her suffering extended through driving winds and deep snow. 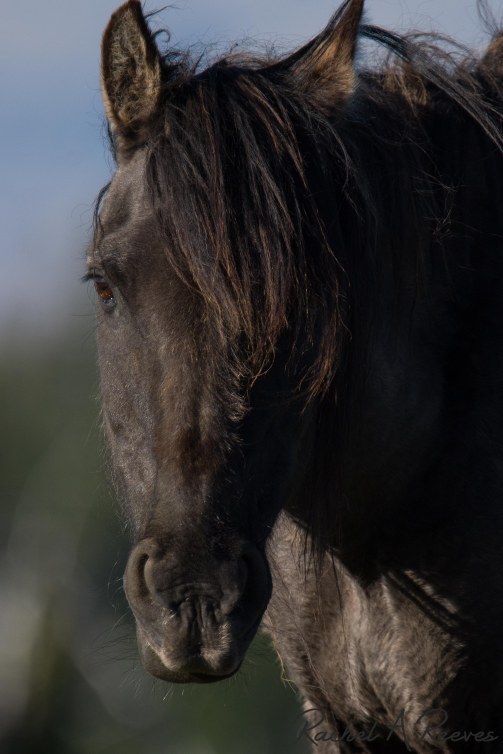 There is a lot that could be said about Winnemucca.  She was a good-hearted mare who went through several bands in her very lengthy lifetime.  She sired Doc, one of the most physically impressive stallions up there today.  She was a strong lead mare, yet I can’t think of a single time where I saw her and she seemed grumpy.  Foals absolutely adored her.  Winnemucca was fantastic with the youngsters.

That is how I will always remember her.  Auntie Winnemucca doting on my Leo and his siblings.

Of course, she was also very close with Momma Felicity.  They made a good team.  The two grulla mares and the stallion that was partial to them.  Now horses memories don’t work the same way that humans do.  It’s hard to know how much Felicity remembers Winnemucca, or how they process the concept of death.  Regardless, her life has not been the same since Winnemucca left.

It was the end of September and while I was actively rebelling against the idea, our last morning on the mountain.  A nasty storm brewing to the west and yes, staying up there would have been a terrible idea, so it’s probably a good thing I have responsible friends who force me to be responsible as well.

…Anyway.  As luck would have it, the morning crew of bands included Custer’s.  If you only have a little bit of time left as I did, then they are the best to hang out with.  Purely objective, scientific research has declared that Custer is the greatest and everyone else had better respect.

Despite the never-ending list of reasons why Custer is the best around (and nothing’s gonna ever bring him down), this particular morning he was stressed.  Poor boy.  All he wanted to do was eat, maybe catch a nap after a few hours – y’know, the usual wild horse stuff.

Felicity had other ideas.  With Winnemucca gone, Felicity is Custer’s only mare, and sure enough, that little tramp spent the whole morning marching over to Flint’s band to say how-de-doo.  It was almost like a dance.  Felicity would go over to say hello to Texas, Custer would snake her back to a safer distance.  Felicity would start walking right back.  Wash, rinse, repeat. 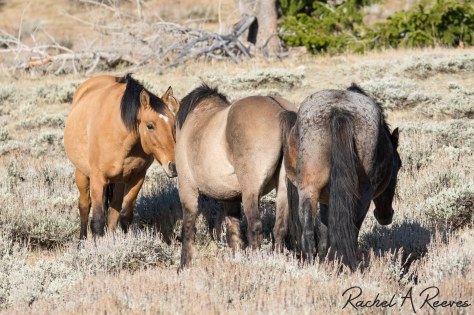 As the minutes ticked by, Felicity was emboldened.  After about forty minutes or so, she did not even bother with the mares in the band.  Oh no.  She started shamelessly flirting with Flint himself.  Right in front of Custer!  As if that wasn’t bad enough, Flint is Custer’s baby brother. Okay, yes, neither of them are actually aware they are related… but, dude.  C’mon man.  This is starting to shift towards telenovella level nonsense. 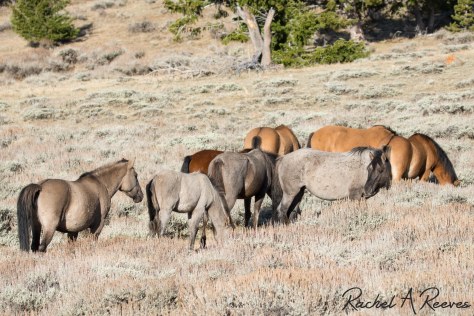 Now in his defense, the situation was also putting Flint in a difficult position.  Like Custer, Flint was not looking for any trouble that day.  Yet no matter what he did, Felicity was unrelenting.  She liked what the Flint was cooking, and was determined to catch his eye.

Eventually, Custer did get frustrated enough that there was some minor posturing.  Even then it looked as though Flint was answering Custer’s “Back off, bro,” by saying “It’s cool, man.  I ain’t making a play for your lady.”

Through this entire scene Felicity & Custer’s daughter, Prospera, was at the fringes.  Ignored.  That too was strange.  Felicity is not one of those over protective paranoid mother types unlike, say, Aztec.  Don’t get me wrong, Felicity is a great mom and has taken excellent care of her offspring.  She is simply… practical? Pragmatic?  Something with a p.

For example, all of Felicity’s foals have been weaned as yearlings, despite her never having back-to-back foals.  Many mares will continue to nurse yearlings and even two year olds in such situations.  And while she has always been kind and affectionate with her children, it has always seemed like her kiddos have been closer to Winnemucca and/or Custer.  Over the summer, Prospera stuck closer to Custer than she did Felicity.  In September, Prospera was almost exclusively at Custer’s side, not Felicity’s. 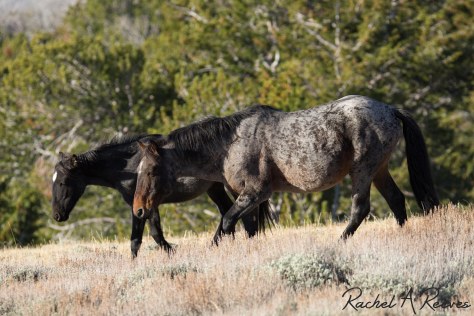 Felicity was withdrawing from her daughter, paying no attention where Prospera was or what she was doing.  That was what really surprised me.  I expected Felicity would be on the hunt for a new stallion.  I have been saying for years now that when Winnemucca died, that would be it for Custer.  Felicity is not the type of mare who will be happy in a nuclear family setup.  Felicity needs the companionship of other mares.

Yet I always assumed that wherever Felicity went, she would take Prospera with her.  I was even comforted by that thought.  The timing was shaping up to be just right so that Felicity and Prospera could stay together – another great mother-daughter pair like Topper & Topper Too (Felicity’s mom and grandmother, respectively).

Is that going to happen?  I guess it still might.  Prospera cannot stay with her papa forever and may just as well get “stolen” at the same time as Felicity.  It’s also possible that they will end up with completely different stallions over the course of winter.  If Felicity leaves on her own for another stallion, Prospera could choose to stay with Custer.  Either way, I am confident that  Prospera and Felicity will not spend the next decade together.

Maybe it’s silly that such a thought stings a little.  Horse brains don’t work like mine does, so why should I let my own feelings warp something that is as normal as breathing?  It is easier to accept that Custer will lose the band over the winter or early spring of this year, because I have seen it happen to so many other stallions.  Watching it play out in real life still hurts, but it’s a natural cycle and I’m mentally prepared for that.  As it is, Custer has held onto a band longer than many of his peers .

Still.  The idea of Prospera “losing” her aunt, father, and maybe even her mother all in the course of a half a year?  I don’t care how a horses brain works, that has to suck. It’s a big adjustment. No matter how it shakes out, Prospera is going to be forced into adulthood after two solid years of being the only baby in her band.

And what about Felicity?  Her days of breeding are theoretically done.  She is back on PZP for the rest of her life.  Will she find a companion who she can mesh with as well as she did with Winnemucca?  Will she bounce through different bands or get it right the first time & settle down with one group for years and years?

Will Custer have a couple more good years of life as a bachelor?  Will he go out fighting?  Or will he just lose the will to live and fade away?

Questions are another inevitable part of life.  Not all of them will be answered, and even those answers I do get may not make any sense.

Everything changes.  Death is a catalyst and in its wake nothing is allowed to remain unaffected.  This is only more so with horses.  In the wild horses world, there is no “fake it ’til you make it”.  They seem to have this innate understanding and acceptance of the flow of the universe through the course of their lives.

I think my Gramma had a pretty good understanding of that too.  She always warned me.  It’s not thta I didn’t listen to her I just… didn’t want to think about it.  I wanted to enjoy the time we did have and not stress over all the time we wouldn’t get.  I wanted to have her point out all the flaws in the quilt she taught me to make and to tell me about where she found all her funny salt shakers; watch her laugh over her cat’s antics and scowl over politics.

Next Thanksgiving I will surely be thinking of all that again and it will feel closer to fondness and good memories.  If I am very lucky, I will do all that and successfully cook a meal without any major mishaps or food poisoning related issues.  But maybe it’s okay if I can’t do that this year.  It’s okay to grieve.  It’s okay to fight the tide a little, even if it is ultimately a losing battle. It’s going to steer you in the right direction one way or another.

I hope that everyone reading this had a fabulous Thanksgiving filled with family and friendship, and hope for the coming year.  But if you didn’t.  If you spent it with frozen pizza surrounded by cats and little else, well, just know that it will probably get better.  Eventually.