Sort of.  I mean, technically our story isn’t set in France nor are there any plot twists involving revolution or guillotines.  Also one of the foals is a boy, but  the title just wouldn’t rhyme as well then, now would it?

We start in the center of the White Mountain horse herd.  Cody’s band is a motley crew, consisting of five mares, two yearlings, a two year old, and a satellite stallion whose sole job seems to revolve around unsuccessfully trying to convince Quicksilver she should speed up and walk at the same pace at the rest of the group.  Yeah, I feel really sorry for the satellite Outlaw.  That dog just don’t hunt.

The five mares are very different, in both looks and personality.  Sometimes it is hard to imagine how they could all get along so well, but somehow they make it work.  They are an extremely tight knit group and remain the only band in the “central crew” that hasn’t gone through any major changes or upheavals in the past six years.

That stability makes for a really great band to raise foals in.  Right now they are the dominant band in the area.  Without any major conflicts, the foals can grow up with strong aunties to dote on them (translation: put up with their young goofball nonsense) and a pair of “dads” who keep everything safe and quiet.  Safe and quiet isn’t exactly as easy or obvious as it may sound.  There is another band in this area in which one mare and her offspring are perpetually surrounded by 7-9 fighting stallions.

Cody’s band is also a case of the PZP (infertility drug)  given in the summer of 2011 working extremely well.  The first foal in the band, Standing Bear, wasn’t born until 2014.  2015 was a little better with two foals.  In 2016, all bets are off.  So far there are already two fillies that have been born, and I am pretty confident (but not truly sure) that there could well be another one or two on the way.

Filly number 2 was born to Dollar, the group’s short and sassy little bay mare. Now there are very, very few babies that will make me jump up and down like a loon when I see them.  One, you shouldn’t really risk spooking the horses like that cuz it’s rude, even if you are a good quarter mile away from them and the jumping is hidden behind a truck.  And two, well… I guess I’m a pragmatic soul.  Foals are a necessary part of the herd and for the sake of genetic diversity I like to keep my fingers crossed for all those mares who haven’t foaled in years (if ever).  Yet at the same time, especially facing a possible “roundup year”, I get a little sick feeling wondering what will happen to the babies in their future.

Anyway, ignore that last bit.  I told myself no depressing talk of roundups in this blog post.

Dollar is special, though.  See, Dollar is sort of a big kid at heart herself.  She was a fantastic auntie to Standing Bear & his siblings, letting them endlessly annoy her with the patience of Mother Theresa.

So watching her with kiddos who don’t belong to her, man, did I want her time to finally come.

Now that it has come and she is the proud momma of a bouncing sorrel filly… well, that patience of Dollar’s really comes in handy.  Her daughter is a pistol.  There’s the usual foal stuff, like demanding Dollar drop everything when the filly wants a snack or a snuggle or a nap. That is all well and good.  But, no, this little girl also thinks it is perfectly normal and acceptable to challenge her two year old brother. 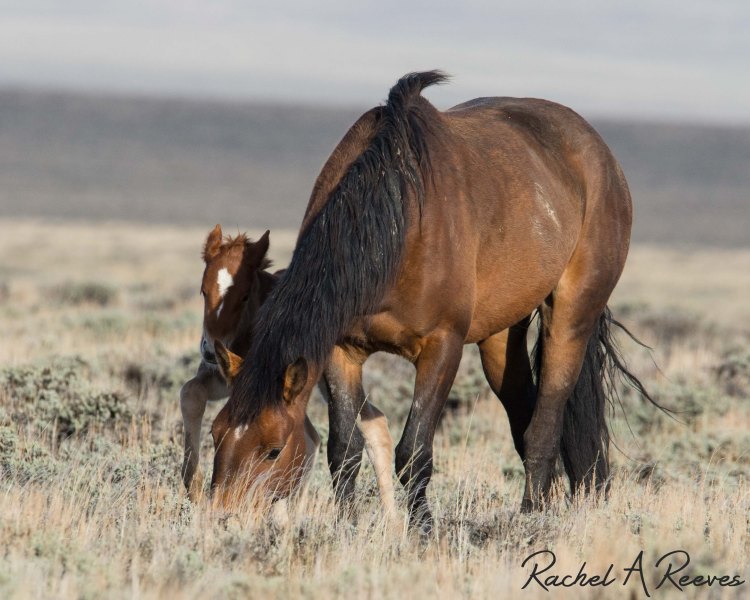 Of course the little stinker gets away with it.  That’s the joy of being the younger sibling!  It doesn’t matter if you started it, the bigger older kid who should “know better” is always going to be the one who gets in trouble.

So to summarize:  Dollar has a new filly and she is fantastic and everything you could want in a wild foal. She is and also a total brat, but when you are in a stable situation surrounded by good aunties, you can afford to be a little bratty.  Cody’s band continues to be a picture perfect example of living the good life in a wild horse herd.

To the south is a very different band:  Reimann’s.  Reimann and his lead mare, Elaine, are a popular subject on this blog.  Elaine bounced around for a while before finally settling on him, the handsome young charmer that he was.  Elaine is in many ways, Dollar’s polar opposite.  Where Dollar is cute and good-natured, Elaine is beautiful and a tad aloof.  While Dollar wasn’t foaling, Elaine has given birth consecutively since 2012.  I really wish that Elaine could catch a break and take a couple years off the non-stop baby making.

I was surprised to see them still down below the mesa in late April.  It isn’t a bad place to be in the winter and early spring, but it’s weedy and the water isn’t as abundant.  There wasn’t really a good reason for anybody other than the odd bachelor *cough* Gladiator *cough* to still be hanging out down below so late in the year and especially not Reimann’s band who is usually up top in March…

Except the part where there was a very good reason.

As my friend and I approached the band, everyone was present and accounted for – Reimann, two mares, and two yearlings.  At Elaine’s feet a foal was sleeping.  Everyone looked a little scraggly, and Elaine was thinner than I have ever seen her.  Once they went up top, that weight would build up quickly and easily, so why in the world hadn’t they done so yet?

You know how sometimes you ask a question and you think that you want to know the answer only to later discover that you really would have been happier staying ignorant?  Yeah…

When the colt stood up and stretched, it was jarringly clear why the band was still laying low.  While the colt is able to trot and lope, the steep trails that led up to greener pastures are a whole ‘nother ball game, and I have a hard time believing he could manage them as he currently is now.

What happened to him?  Heck if I know.  To my untrained eye, it doesn’t look like a predator was involved, nor do I think it is barbed wire related.  It’s too long and wide for it to be because he got in the way of fighting adults.  I’m just stumped.

Yet as gruesome as it looks, it could be much worse.  Elaine is one of the most experienced mothers in the herd, and if anyone can keep a foal alive through tribulation, it’s her.  She has kept the band down below where he can heal, sacrificing some her own health and comfort in the process.  It’s working.  The wound had been around for a least a week, but there wasn’t any sign of infection.  While his back leg is stiff, he can still move through it.  I even saw him trotting at one point after Elaine decided to move them over a bit.  Reimann has also been doing his job, chasing off other horses well before they could pose an actual risk to the band, thus ensuring the little guy isn’t put in a situation where he is forced to gallop away from a threat.

I don’t know if Elaine’s colt will heal right.  If he will survive to next year.  If he will become a band stallion on his own some day.  I think he has fabulous parents and a good chance of making it, but I don’t know for sure.  Heck, I don’t know if Dollar’s filly is going to make it and she’s perfectly healthy!

It is all just part of being a wild horse.  They live in an age of wisdom and an age of foolishness.  There will be times of plenty where life is grand and times of drought & struggle.  Times to fight & bleed and times to    Mares are going to raise foals who become the powerhouses of subsequent generations.  They’re also sometimes going to lose foals. 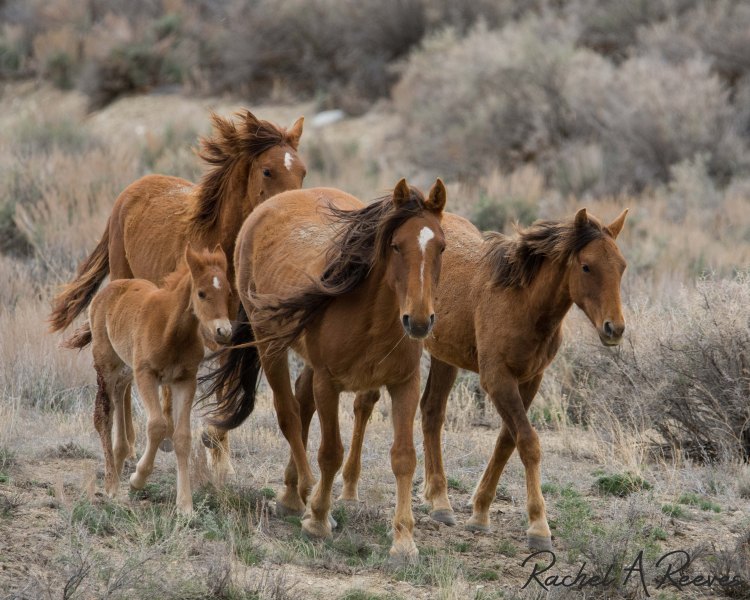 Sometimes, true freedom feels a little like heartbreak.  As Dickens wrote, “There is prodigious strength in sorrow and despair.”  There will always be foals who don’t make it, fights that leave stallions bloody and broken, and droughts that take lives.

That isn’t going to be every time.  There is also going to be really good times when there is plenty to eat and no strife.  Most of the time it will be somewhere in the middle.  Dollar, Elaine, their offspring, and their family will spend average days eating, napping, grooming each other, mating, and doing average horse things.  And really, who could ask for more than that? 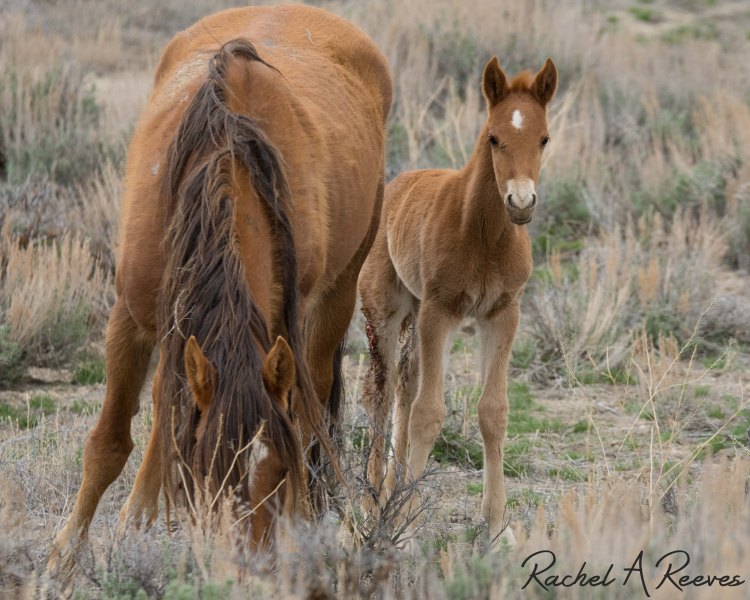 I also wanted to hop in & issue a quick apology for my lack of writing updates.  I’ve been having… something of a meltdown and it’s been really hard to write without sounding like a crazy person.  I may not be able to give you guys any wild horse updates for the next month or so either, but rest assured that I will have plenty of time for blogging come August because I’m quitting my job before I get so stressed out that I pull an Office Space and start breaking all the computers.  Consequently, if anyone reading this in the Denver-metro area that knows of a company that is hiring and would love a plucky, hard working little employee with a broad skill set and a good work ethic, please let me know?  So long as it isn’t customer service via telephone or involve home warranties or real estate agents, I’m 1200% game.

4 thoughts on “A Tail of Two Fillies”