Custer is the greatest.  No really  Find me doesn’t like Custer.  Oh, that’s right; you can’t.  That is because everybody loves Custer.

Our story begins in 1996.  A small dark colt was born to Sitka and Shaman.  You may have heard of them before.  They were only the Pryor power couple of the nineties.  Custer is the second of five of their offspring who are still wild and kicking.

His childhood (colthood?) and subsequent early years as a bachelor were fairly routine.  It’s not until five that Custer really started to get interesting.  Which is why at this point I have to thank Alex.  A ton of this information came from him.  When it comes to talking about Pryor history, Alex is the best!  He’s also a delightful human being, though that is neither here nor there at the moment.  This stuff wasn’t really meant for my blog, but I kept getting distracted and… shoot!  Yeah, I should get back to working on that idea from back in August…  Anyway, the rest mostly came from shooting the breeze (no, not that Breeze) with my friend Lauryn and reading throwback Pryor Wild blogs.

At the tender age of five, Custer won his first mare.  That’s right, I said five.  Bet you didn’t think that kind, gentle Custer was also one bad mother.

While he was able to snatch fair Beatrix out from under Prince’s nose, it wasn’t meant to be.  She died that winter. 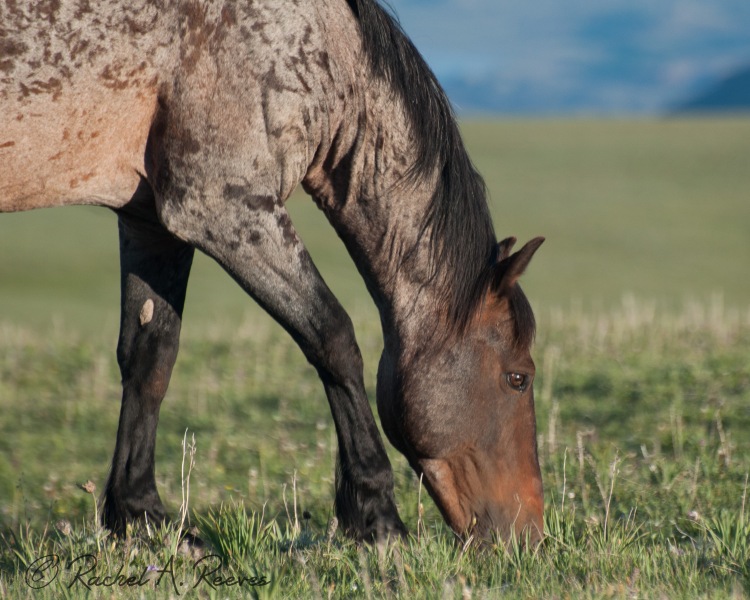 This marks the beginning of Custer’s Tragic Years.  He bounced back and became the proud band stallion of Waif over the winter of 2003.  This tells us that Custer clearly has excellent taste.  Things kept looking up when Waif gave birth to a bouncing bay colt in 2005 – Replica.  I was in college at the time, working hard at scraping together enough cash for the occasional Runza run, so I don’t have any pictures of little Replica.  But I am confident that was one cute foal.

But this is Custer, and Custer is not allowed to have nice things.  Replica was shot and killed by that fall.  Ginger and Makendra found his body, which is how we know the death by bullet part.

Waif left Custer for Corona almost right away.  You can’t exactly blame her. Waif really likes Corona, and the two have stuck together for the long run.

Now Winnemucca is a pretty awesome mare in her own right.  She is not the oldest mare currently living in the Pryors, but she’s close.  Winnemucca has been through a lot in her life and her experience has made her the best matron a band could hope for.  Not only is she a great leader, but she is also a great auntie who disciplines naughty foals even better than their own mothers do.  Since Winnemucca was permanently on PZP by that point, foals of her own were not  an option.  But who cares about babies when you’ve got Winnemucca at your side?

There was still one piece missing in their family.  Felicity joined the wayward crew in 2010 after the mysterious wintertime disappearance of Ferdinand’s band, whom she & her daughter Ingrid had been with.  With her came a new foal, Last.  Winnemucca & Felicity get along pretty well, so together they made an adorable family.  Custer’s luck was turning around.

A year later (August 3, 2011 to be exact), Custer added another member to his family.  Felicity gave birth to little Leo.  Six years after Replica was killed, we finally had a Custer baby back on the range!

Except… remember when I pointed out that Custer can’t have nice things?  In the following summer of 2012 both Last and Leo were removed by the BLM.  Custer was 0 for 2 with offspring, through no fault of his own.

Luckily, Custer’s remaining mares stayed intact despite the removals.  Bands are much more likely to stay together when a bait trap removal is conducted versus a helicopter roundup.

Felicity did foal again in 2013, giving birth to Navigator, a fluffy little grullo. Navigator is still a wee little thing, as you would expect from his small parents, but he has spunk to him and with luck he will get to stay wild and win a band of his own some day.

So there you have Custer’s story.  If you don’t love him by this point, well… there’s probably no hope for you and you should go sit in the corner and ponder your life choices.  Or keep reading.  That works too.  See, this blog is not just about why Custer is lovable, it’s why he is the greatest.

Some people may try to tell you that there are other Pryor stallions out there who are better.  They are wrong.  I forgive them for being wrong, but let’s set the record straight.

See, some of you guys may have heard of this obscure little PBS documentary about some other Pryor stallion.  What you probably didn’t know is that without Custer, the entire thing would have fallen apart.

Towards the beginning we see a 2 year old Custer dashing across a meadow with his family band.  Without this shot, would we have understood the gravity of Cloud’s life as a bachelor?  Or truly understood the importance of family in the wild horse family?  Or gotten a scope of the topography of the Pryors?  And even if we did not understand those things, would we have gotten a second and third film without Custer?

So thank you, Custer.  Thank you for being the glue that held Cloud:  Wild Stallion of the Rockies together.  You owe him one, Cloud.

Custer is the sweetest stallion around.  When observing wild horses, it can help to split the stallions into two categories:  the lovers and the fighters.  Now there are certainly more than just two categories of stallions just as there are more than two types of human or any other creature, but in the field it’s easier to start with the basics and drill down from there.

Custer is fun because he does not look like a lover.  The dude is scarred up all to heck.  When a roan is injured, their hair grows back their solid base color.  And clearly those long years as a bachelor took their pound of flesh.  He looks like the toughest guy on the block.  If Custer was a human he would probably have a lot of bruises, some tattoos on his massive biceps and a nose that was crooked in at least two places.  You’d be afraid of bumping into him in a darkened alley.

Yet Custer is a gentle soul.  He stays on the fringes of the main mountain top group.  He would prefer to dote on his mares and foals or maybe have a good nap over picking a fight with the bachelors.  Custer is not the  most prominent stallion, and he seems to be okay with that.  He doesn’t need a massive band of mares or first rights at the watering hole.

More than that, Custer is the underdog.  He has faced some pretty unlucky breaks in his life.  Yet despite it, he keeps pressing on.

One day Custer will leave this life, and he may not have very much to show for the 20 some years he was on this Earth.  At least, not when compared to others out there.  But who cares?  He will have a legacy and he will be remembered.

You don’t have to be a major player in this world.  You can be the unlucky one, the one life kicks around, and still find happiness; still contribute something.  Underdogs aren’t exciting because they’re a big bunch of losers.  They’re exciting because they take what life gives them and find a way to push through.  They make this world better just by existing.

Custer managed to triumph despite all the setbacks in his life.  And yes, Custer is a horse.  He doesn’t sit around reflecting on his life and her certainly doesn’t do it in those terms.  Horses are creatures of the present and don’t really have a need to ponder over what happened in the past.  That doesn’t mean that we can’t draw inspiration from him, or feel the quiet peace of Custer and his family members, right?

17 thoughts on “Custer: The Stallion, The Mystique, The Legend”