As the Mayan Apocalypse steadily approaches, I can go to my doom with the peace of knowing that I finally found an excuse to reference MC Hammer in my blog. It was the little things that made this life so wonderful.

Earlier today I was trying to blog at work. It was a little like pulling teeth. (In the off chance one of my bosses stumbles onto my blog: just kidding! I was slavishly working over all the super important tasks you graciously put on my plate)

Thankfully, where I fail Bandit pulls through! What a fantastic pony! Bandt is many things. Rarely is he useful. A list of adjectives describing Bandit includes: nuissance, trouble, obnoxious, irritating… 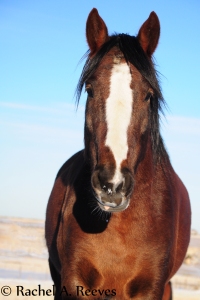 I’ve said all this before on this blog, of course. It’s time for a proper example of what life with Bandit is really like.

Let’s set the stage, shall we?

Right now Dad and I are making some changes to our corral set up. It would be more accurate to say that Dad is working hard at banging out angry Breeze induced dents and rearrangng while I wander around getting distracted by ponies. The ultimate goal is to alter Breeze’s pen so it is a little smaller and more squarish to help with traning. Hands down, Breeze is proving the toughest of the four to gentle, so I’ve been experimenting. 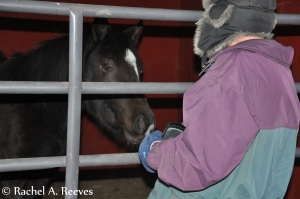 Breeze still can’t decide if she likes humans (specifically their fingernails) or if she just wants to be left alone.

Tonight I was being helpful by not assisting Dad. Instead Breeze and I were playing. The boys were out in the pasture grazing but more importantly, staying out of the way.

I did what any good daughter would do: I grabbed my camera.

The name Bandit was not given lightly, you see. The goober has a mischevious streak longer than those chemical trails the government is tossing in the air and a kleptomaniac’s restraint. Nobody suspects the 1/2 ton Mustang could be capable of stealth. It’s the perfect cover, really.

This time Bandit swiped a hammer. In honor of this, Bandit shall be renamed ‘Captain Hammer’ for the remainder of this blog post. Captain Hammer easily outran The Man. Not that it was much of a challenge. Looking to expand his criminal enterprise, Captain Hammer next turned his attentions towards his colleagues. Whether the intention was to recruit underlings for his Horse Mafia or to take out potential rivals is unclear; I don’t think I want to know.

Murphy’s Law requires all shenanigans occur after the sun has set and my flash is still in the house.

Translation: Captain Hammer chased the other horses around by poking them with said hammer. As Ziggy and the kid took off, Captain Hammer gleefully chased after them. That’s my boy?

Is that a hammer in your mouth or are you just happy to see me?

Eventually the hammer fell and Dad retreived it. This did not deter Captain Hammer who continued in his plans for world domination. He tried to instigate a riot with the assistance of the littlest midget. It didn’t end well – the kid fell over. Captain Hammer does not know his own strength.

How kind of Captain Hammer to relinquish the the spoils

Not to worry – the only thing damaged was his pride

Undeterred, Captain Hammer decided I would make the perfect playmate. He followed me around, the Jaws theme ever present in the background of the night sky.

At the end of the day, victory belongs to the humans!

PSA: If you want crazy antics in your own pasture, consider adopting a Mustang. With over 50,000 to choose from, your sure to find a level of crazy all your own!